Here’s quick video of the honey bees in my backyard doing the Nasonov Boogie. Yesterday I said, “The sound of the bees scenting was intense, like the sound of tiny little chain saws.” Check it out:

The end of the video when it goes back to normal speed may not be 100% normal speed. During the slow-mo section, you can almost see the wings beating. I was able to slow it down even further on my computer, but the wings beating still only showed up as a blur. They crank it up a notch when they’re fanning like that.

Anyway, the pheromone is also used to orient the bees to food and water sources, but this early in the year when snow is still on the ground (it snowed again today) and 15°C is not a daily occurrence, I’d say it’s mostly for orientating the young foraging bees on their maiden flights.

I recommend The Biology of The Honey Bee, by Mark L. Winston for more info on the importance of pheromones in a honey bee colony (and a whole lot more).

April 3rd, 2011: I’m adding this video of Hive #1 recorded at the same time for my own records so I can use it for comparisons next year.

Nasonov is sometimes spelled Nasanov. Tomato, potato. Let’s call the whole thing off. Also: They could be fanning to ventilate the hive. However, judging from the strong smell of pheromones in the air and how many of them were fanning with their bodies bent in areas and at angles that probably wouldn’t create a current inside the hives, orientation scenting seems just as likely. But who knows. 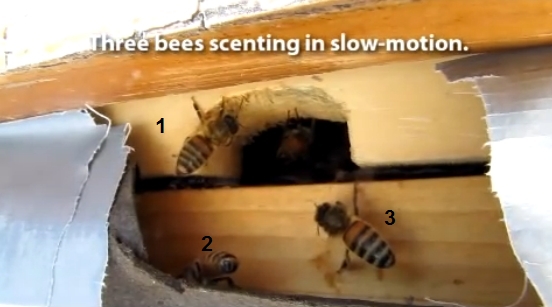 I have a few reasons to think the bees were cranking out the Nasonov pheromone for the young bees on their maiden orientation flights. The unusual odour and the sound of it for starters. But the main reason I didn’t think it was regular fanning for ventilation was the haphazard position of most of the bees. Many of them, if they were trying to create an air current inside the hive, were pointing in the wrong direction. Bee #1 in the photo has a good abdomen twist on the go and is close to the entrance, so it could be scenting or ventilating. Bee #3 could even be ventilating, though most bees I’ve seen ventilating the hive point into the entrance. And bee #2 hasn’t got a chance of ventilating the hive. Does a bee need to stick its butt in the air to send out the Nasonov pheromone? I don’t know. But they were twisting their abdomens up and down enough to make me think that’s what they were up to. So that’s my best guess.

May 9th, 2011: Check out The Aftermath of Moving a Hive video to see honey bees sending out the Nasonov pheromone en masse.

December 2018 Postscript: I would prefer to rewrite (and sometimes delete) many of these older posts so I don’t look like a clueless dolt half the time, though to be honest, that’s a fairly accurate description of most beekeepers for the first two or three years (I’m looking at me here). But I have to say, many of the comments from these earlier posts — before my neighbors forced me to move my bees and when I posted on a regular basis and had a regular flow of readers and commenters — those comments are good. I’ve learned as much from the comments on this blog as I have from most of the online forums I used to read. So the point is, I’m keeping this one for the comments.

15 thoughts on “Cranking Out The Nasonov Pheromone”

This site uses Akismet to reduce spam. Learn how your comment data is processed.

Now I see the secret of the
making of the best persons,
It is to grow in the open air
and to eat and sleep
with the earth.
— Walt Whitman